THE VAMPIRES (I) - WALKING ON THE SAND 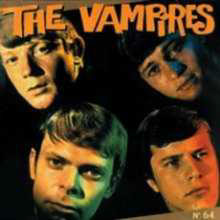 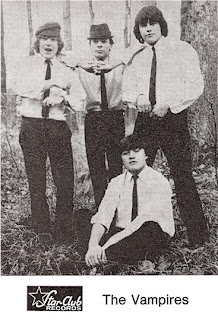 The Vampires opened their first appearance with the instrumental “Walk, don’t run”, by The Ventures, at the Astoria Hall, located between Schweinfurt and Sennfeld besides a materials company building. This song become later their theme song from these day: Satuday, September 1, 1962. The Astoria hall - one of those dance halls, as they were, could not be marked by the presence of thousands of American soldiers, which the dollars were very loose in his pockets, in almost every district of Schweinfurt. Drummer Micky, the only one of the group with stage experience (he was drumming in a known Schweinfurt dance band) had given them this job because the owners of the Astoria hall, Adolf and Lissy, knew him quite well. Lissy conjured after work most exotic dishes that they were allowed to enjoy. Always surrounded by loyal followers, friends, and friends who have enjoyed the privilege - to be allowed to stay with them still there - even after curfew.

Wolfgang Jünger (March 30, 1944) discovered his love for music years before, when suddenly out of nowhere, a devastating hurricane in the form of rock 'n' roll swept across Germany. Much to the dismay of the older generation, with this, awful black music 'could absolutely do anything. Nor with the associated side effects, such as Levi's jeans, white or striped shirts, black leather jackets, bubble gum and landscaped with lots of pomade hairstyles for male followers who emulated the screen idol James Dean - and petticoats or skin-tight jeans, tight blouses, ponytail and high-heeled pumps with the girls, who wanted to be like Liz Taylor. The rock 'n' roll was in the 50's as a social conservative scandal! The new form of music was felt even as an attack on morality, decency and order. Instead performers like Caterina Valente, Freddy Quinn, Bully Buhlan, or Gerhard Wendland and songs like “Oh Mister Swoboda”, or “The Blaedel Polka”, had to fight against  songs from the radio receivers: Bill Haley’s Rock Around the Clock - ABC Boogie - See You Later Alligator - Shake Rattle and Roll, or hammer title of a young truck driver from the southern United States: with Elvis Presley Hound Dog, or Don’t be Cruel. That spurred Wolfgang on to excel in English class because he wanted to finally understand what the lyrics of these songs were acting. So they were fascinated, preferably the American soldiers Radio AFN (American Forces Network), who played these songs to their delight day and night. Wofgang, finally, was caught by Cliff Richard's backing group, The Drifters, who later called themselves for copyright reasons, The Shadows, and by Apache, FBI, or Guitar Tango. 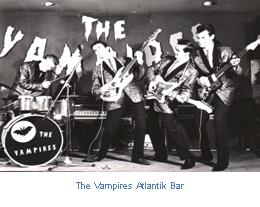 This was something completely different than the boring song and Studies, with which he had to toil as a child. From his eleventh birthday, Wolfgang had piano lessons, and by the related exercises the joy very quickly lost. In the spring of front of the window of a music store, Wolfgang saw a guitar, as futuristic as if it came from another world, stood there all alone at the top in the window display. The body, painted red consisted of a solid board, which was cut at the point where the neck of the guitar was screwed onto the body, to allow for the game in the highest positions: a Hofner (360DM). Nevertheless, he began to save money, and along with a small reserve, after a few weeks he was able to finally realize his dream. Shortly before he met Hans, a friend who lived in the neighborhood and wanted to know what he was wearing under my arm. So I showed him my newest pride. Hans said: "Come up to me, I have to show you something too. Since when do you play real guitar? " They entered the small living room and there in the corner stood a white board Framus guitar and a small, self-built amplifier with speaker. "Does not matter, sit down, I'll show you something simple!", Hans said. From this day on Wolfgang worked tirelessly in every free minute with his guitar. He met with Hans to practice and after several weeks, they both had a considerable repertoire, both instrumental and vocal tracks on. "How about if we stopped once for a drummer for?" On a Saturday night Wolfgang attended a dance performance in Wallbräu-basement and could not believe what his eyes are seeing: a colleague from his apprenticeship: Mickey Kluge behind drums climbed out. "Oh Mickey, since when do you play drums? By the way, we have formed a guitar band. Would not you feel like time to come to a rehearsal because we are looking for a suitable drummer! "

Mickey did have concerns, but agreed. From then on, they were rehearsing twice a week ever Tuesday and Thursday evenings in the City Hall Park. Then they visited the newly-opened Vienna Woods. At the end of August, and at the end of the trial, Micky said casually to Wolfgang: "What do you think of it as if we were going to play next Saturday in Astoria hall? I've already cleared everything, it works in any case. We must make up only a band name! " When Wolfgang had caught something of his dismay, he noticed spontaneously "tornadoes" field. As their music originated in America and England, they settled on The Tornados and crafted them a great logo, which they paint with green luminous color to it to hang over the stage, so that the situation also looked really professional.
After their first and successful presence in the Astoria hall they played there regularly. First Saturdays only, then Friday and Saturday and Friday after a few weeks, Saturday and Sunday. They always played from 20:00 to closing time at 1:00 clock in the morning, 6 DM per man hour. Through the routine they got through their regular performances, they got better and better, which is rumsprach quickly with the many other pubs owners, increasing their value and demand.

They deal that reached after Gerolzhofen and Kitzingen, where there were the three most famous dance clubs in the area with professional bands. In Schweinfurt, there were two shops where bands played every evening. The Tivoli, on the ground floor of a red brick building in the Luitpoldstraße, and secondly, the Lilli Marlen Bar, opposite the main entrance of the American barracks. They were there during the week for a regular guest. What they will also occasionally made, was the choice of the musicians, they even replace for 'an hour to even play properly on expensive instruments on top of the amplifier. The bar owner had no objection to the musicians were happy about the unexpected pauses and our reputation grew so steadily. In such an action addressed to Wolfgang one evening  a former classmate and asked him why they were playing without a bass player? He was bass player and would like to join us. After a brief consultation they agreed and invited Karl Heinz “Charly” Dees to a rehearsal. It turned out that he had never played bass. As he promised them new professional speakers and an echo unit, they finally consented. Wolfgang then teaches Charlie to play bass. They met every day and he made progress very soon. Soon later Charlie finally was at their first show in Zehnthof Gerolzhofen starred and also earned some vocal tracks. If a piece was that he has not mastered, he simply turned off his bass guitar, and Wolfgang mean a little darker, what has struck anyone.

Wolgang had time for a few weeks to work night shift and then every time after work in the Lilli, because there during that time played an extraordinary group: The Strangers from Innsbruck, the perfect Cliff Richard with his Shadows.

In autumn 1962, the disaster came two months later with full force from the speakers of the jukebox, which stood to the left of the podium in the Astoria hall. Instrumental started chirping, humming, and other strange noises. Then took over a whimpering the organ melody. Telstar was the mature work, in line with the first American satellite television. All this would be for them but still have been a problem if not for the name of the artist of this tune would have been: THE TORNADOS was written on the tag attached to the box, and the title of this American band was on the way, not a huge hit to be only in Germany. They were thunderstruck. Just at the moment, as their reputation grew steadily under this name, something like that! Everyone we spoke to them: "Are you that? That you're really not ...! " What should they do? Look around for a different name, was the only alternative. But which? It was heartbreaking. For Charley, who had a passion for the mystical, came up one evening with a proposal, which they liked right away and convinced: "How would it be if we would call The Vampires?” Immediately they had the idea of ​​how we should design the band logo. Under this name they were then - but with a rotating cast - up to 1969 and also produced several records. Changing our band name came under the circumstances to general understanding and had no adverse effects in terms of exposure or amount of the fees. As Vampires they were immediately accepted, since the new name was more interesting.

THE VAMPIRES - WALKING ON THE SAND