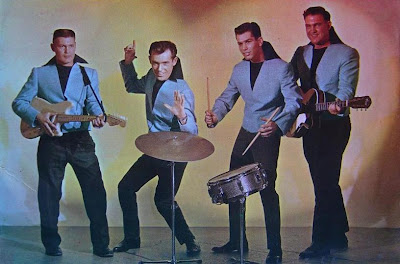 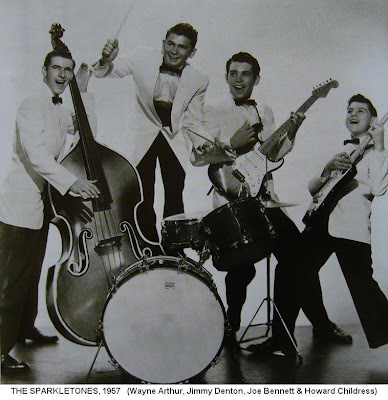 JOE & THE JAGUARS, as they called themselves, were four young Americans serving in the American military base of Torrejón de Ardoz (Madrid) to perform military service. They were led by JOE BENNETT, great guitar soloist and as experienced as coming from a US Rockabilly band called The Sparkletones. The origin of The Sparkletones goes back to 1955 when four young Spartanburg (South Carolina), aged between 12 and 16 years, decided to unite to form a band. In 1956 they are discovered by Robert F. Cox (CBS). After several months of performances, they get a contract with ABC-Paramount label. At early 1957 they recorded their first single with the catchy 'Slacks Blacks' nationwide success that gives them the opportunity to make long tours around the country by the famous promoter Alan Freed and television appearances in' American Bandstand "Dick Clark and the 'Ed Sullivan Show'. Despite placing a couple of issues on lists, their latest albums in 1958 and 1959 were not just impact. The lack of success, coupled with legal problems in order to keep his contract due to his young age and the decision of the members to continue with their studies ended with the dissolution of the group in late 1962 and late 1959. In early 1963, JOE BENNETT went to Spain for the fulfillment of his military service in the American Base Torrejón. Together with three other military friends, also music fans, the formed JOE & THE JAGUARS. After this pair of discs, JOE BENNETT released in May 1964 with an EP Hispavox more, but this time alone and singing in English. Then each returned to his country and the group disbanded. JOE BENNETT continued as editor and music teacher, and during the last decade sporadically reunited with his first band to perform at various festivals of Rock & Roll (Official Website). 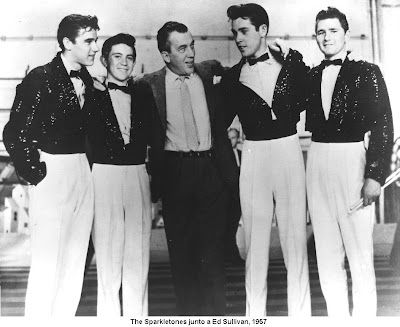 Thanks to their outlets in Madrid, and the visit Dion DiMucci (Dion & The Belmonts) had on the Base , who came to Spain in 1963 for his appearance in a TVE show in order to promote their albums (distributed by Hispavox), Joe and his band caught the attention of record producers, and quickly had the opportunity to record some songs. They recorded  8 songs in 2 EP's: one containing two instrumentals and two cuts in Spanish, and a chaperone of a very young KARINA, of only 17 years, which would result in their most rock and today one of most wanted of his discography.


In the website Rocakbilly Hall there is an article by Joe Bennet, fro where I have extracted the following:

-Me? I'm still recording, working on some sound tracks. My dream is to write and record a movie sound track. I have made contact with Mickey Hart and have enjoyed it. We are old AF friends and played together in The Jaguars in Madrid ... he is a Giant in the precussion field. BY golly, I'll show 'em! (Sometime in '60)... I joined the Air Force! That'll fix 'em, by Ned! As I got up at 4:30 am at Lackland AFB, Texas I thought about how they were really hurtin' now! Boy, I had 'em where I wanted 'em! I'll get away from that dirty rotten bidness (That's what they call it here}. I was gettin' my licks in left and right and I could tell they were hurt by the way they didn't write! Stationed in Spain, I wrote Dad to send my Strat and Deluxe. He did and soon I was playing again down at the Airmen's Club. We took our GI band down to Madrid's Record Company "Hispavox" and cut a demo. The Engineer called the president and told him about us. They signed us up and ...I tried to run from it once when I was about 20. Joined the Air Force, became an Air Traffic Controller,got sent to Madrid, Spain for 3 years and just wanted to be 'one of the boys'. Left the Strat at home with parents in South Carolina. About 3 months into my stay in Madrid, I was at the NCO club on "Sit in" night. I got up and made a fool outta myself. The wanted me to join the band. It was a few GI's who enjoyed playing. The year was 1961.

-I wrote home and asked Dad to send the old strat over (With amp) which he did. I started a little group called "Joe and The Jaguars" and we landed a recording contract with Hispavox records! We also backed up some of Spain's stars like "Karina"...doing Hully Gully music.

-Our drummer was a kid named Mickey Hart...first rock band he ever played in. Of course he later was one of the drummers for The Grateful Dead and has written books and done movie sound tracks. He is one of the best with sticks I have ever known.

-I stayed in The Air Force for 11 years and played in bands the whole time...even in Nam. A little band called the "Country Cousins" at Nha Trang AFB. Berlin, "The Brass Door" and others I can't remember.

-Somehow, somewhere, someone has my old strat (55-56) and I really would like to see it. I traded with one of my old GI buddies ... who knew? ... I've been told that $21,000 would pretty-well cover it. I think I traded it in Spain. We had a band called The Jaguars with numerous members who came and went. Guitars, amps, reel-to-reel tape recorders were turned over as much as military personnel. If anyone knows where my old worthless guitar might be, please let me know. I just want to touch it ... a little bit!

-Want to know why? Try breaking a string (Any string) in the middle of your jam in front of about 5000 ... As you bend, turn and twist, you'll be amazed at how much you sound like a sick sackbut or dulcimer mixed with a shakin' sitar! You are welcomed to use my peach orchard. So I set out to find my old strat. I wrote and phoned ... sent messages, etc., but to no avail. Then one night as I lay there contemplating ... there it was! I remembered having Dad to send it to Torrejon Air Base, Spain! My old deluxe amp and old strat!

Email ThisBlogThis!Share to TwitterShare to FacebookShare to Pinterest
Etiquetas: 1964, Joe and The Jaguars