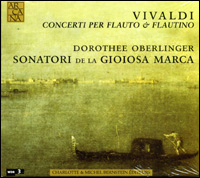 Antonio Vivaldi (1678-1741) composed this real jewel, Piccolo Concerto in C Major, RV 443, in 1728-9. I take this as one of the most beautiful instrumentals of all times. And I do not know why the love was the guide of this composition. ENJOY the 2nd part!

Email ThisBlogThis!Share to TwitterShare to FacebookShare to Pinterest
Etiquetas: Exceptions 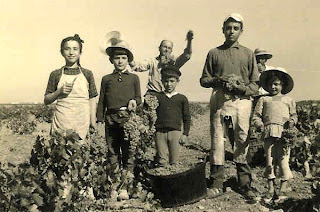 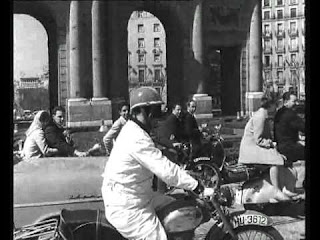 Los Géminis finally in Spanish Garage! Let me, please, the band bio in any other day. Nevertheless, let us listen this amazing cover. Enjoy! 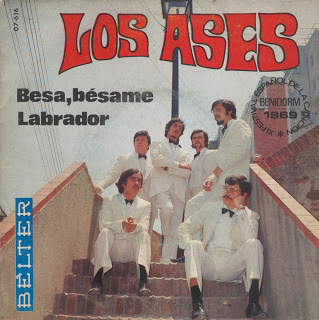 Los Ases, from Murcia.Another flower pop song. In 1969 they were pre-selected for the XI Festival de Benidorm (link to the rest of pre-selected songs and bands) with this song. Enjoy! 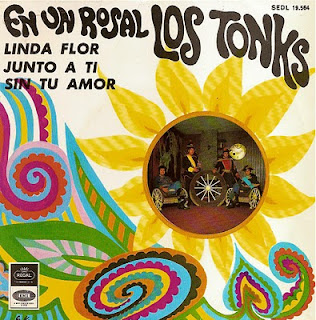 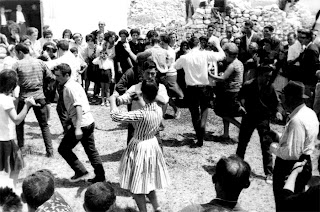 Los Continentales again! This time covering "Hold me", by P.J. Proby, as Los Dracs did as well. By the way, have a good Sunday! Today, I will drive 120 kms to spend the day with a great friend & wife in Mora (Toledo). Later, bro! 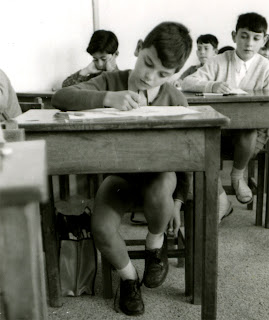 Los 3 de Castilla again. This song could be an example of the current way of a lot of Spanish bands: mixing ye-yé, Spanish "flamenquized" vocals, and melodies. The mixture is something nice. Enjoy! 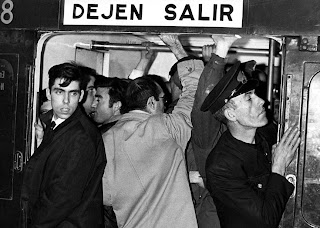 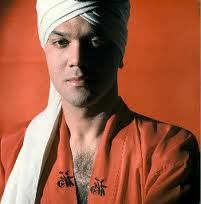 Los Nivram again! Someones suggested that the name came from the surname of the charismatic Hank Marvin (The Shadows): M-A-R-V-I-N = N-I-V-R-A-M. But I think that is coming from the name of The Shadows' song Nivram. Anyway... enjoy!

DAVE ALLEN AND THE EXOTICS - SHE WALKS 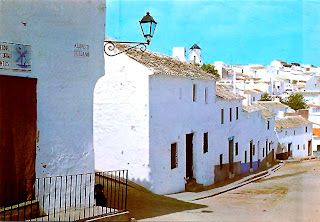 DAVE ALLEN AND THE EXOTICS - SHE WALKS

Email ThisBlogThis!Share to TwitterShare to FacebookShare to Pinterest
Etiquetas: 1965, Dave Allen and The Exotics, Spanish nuggets 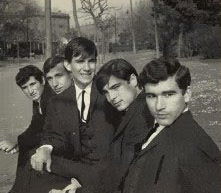 Juan Camacho (1947-1982) learn to play the guitar and soon makes his first steps with a legendary amateur band from Valencia. with a little name known, however, left a pleasant taste: Los Angeles Negros, also remembered for being the session musicians of many of recordings from the early days of the Duo DinámicoDuo, both in the recording studio as on stage. Unfortunately, the tragic death of drummer Victor Perugia in car crash accident disrupts the promising band. They recorded 2 EPs. Enjoy! 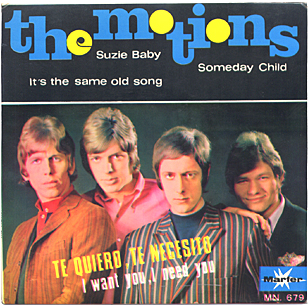 
The Motions were very eager to live from their music. So they made some terribly good stuff, and some dreadfull stuff to make money with. One thing is true though: They fabricated that Dutch anthem called "Everything that's mine". Richie Clark and The Ricochets were founded in The Hague (Den Haag) in 1963. The members were Rudy Bennett (real name Ruud van de Berg) vocals as Richie Clark, Hans Emmerik on guitar, Hans Hoogduin on bass, Ton Lamet on guitar and Gerard Melkert on drums. A single was made in '63 called "Ecstacy", "Ever since you said goodbye" on the MMP label. A band name in combination with the name of a singer went out of fashion. So somewhere in '64 they were just called The Ricochets. Hans Emmerik left the band and was replaced by Robbie van Leeuwen who came from "The Atmospheres". Ton Lamet left the band and was replaced by Kid van Ettinger. Gerard Melkert left the band and was replaced by Sieb Warner who came from a band called "Willy and The Giants". They made two singles in this line-up. The first was "Honeymoon song", "Springtime" on the MMP label and the second was "Whiskey doodle", "Gee whizz it's you" on the Lumirex label. Somewhere later in '64 Rudy Bennett, Sieb Warner and Robbie van Leeuwen sold their Fender guitars, bought Gibsons, and formed a new band called "The Motions". Kid van Ettinger went to join "The Incrowd", one of Hollands best R&B bands ever. A new member was Henk Smitskamp on bass, who came from "Willy and The Giants". The Motions first single was released in '64 and included "It's gone" and a smashing "I've got misery". It was released on the brand new Havoc label. The Havoc label was founded in '64 by a few quite famous people in Holland: Jan Cremer (the famous writer of  'I, Jan Cremer'), Willem van Kooten (famous DeeJay), Cees de Man and Cees van Zijtveldt. But I think you must be from Holland to know who these people are. 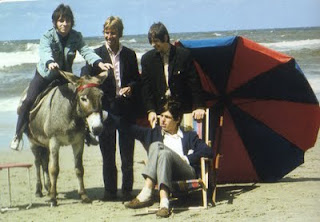 They used Jan Cremer's provits of his first record to get the label going. This single was released in '64 on Havoc and is quite good. It included the well known songs "Boom boom" and "Good morning little schoolgirl". In '64 The Motions were one of the support acts at a Rolling Stones concert in The Hague. It ended in a riot, which was shown on the television the next day. People smashing chairs, ect. Early '66 they recorded two singles at the Pye studio in London with free lance technician John Stewart. Earlier, John Stewart founded a production company with Scott Walker of The Walker Brothers. This connection made it happen that The Walker Brothers recorded The Motions' "My love is growing". On the 24th of June '66 The Motions released the LP "Their own way". In October '66 They received the "Ossekar" award at the "Grand Gala der Jongeren", or "Grand Gala du Teenager", in Scheveningen. This event took place at The Casino with fifteen bands like Hu and The Hilltops, Q65, The Golden Earrings, The Outsiders, The Clungels and Rob Hoeke's R&B band. Every band had to show their stuff within twentyfive minutes. The three Ossekar Awards went to The Golden Earrings, The Motions and The Outsiders. On Tuesday 20 december '66 The Motions supported Little Richard in Paris, France, together with The Outsiders and the French group Frankenstein and The Monsters. Parts of the gig were recorded and broadcasted on Radio Europe 1, the organisers of the whole event. Tickets were available for up to thirtyfive guilders. Rather expensive! Little Richard's shirt was torn of his body by female fans. Frankenstein and The Monsters did a daft horror-act which included spitting blood. In December Rudy Bennett went solo and covered Tim Hardin's "How can we hang on to a dream". On June the 5th '67 a special TV programme of thirty minutes about The Motions was broadcasted called "Omsingeld" (surrounded). This goes to show how popular they were, as no band ever got the honour before. In November '67 the band released an LP called "Impressions of wonderful". On the 22nd of May '67 The Motions performed at a festival in Mallorca, Spain. Also in 1967 Robbie van Leeuwen left, formed "Shocking Blue" and became bloody famous indeed. But that's another story. He was replaced by Leo Bennink who came from a band called "Mack". Henk Smitskamp left and went to "Living Blues". He was replaced by Gerard Romeyn who came from "The Teeset". After only six months he left again and joined "Image" and was replaced by Paul van Melzen who came from the famous "Haigs". Their manager by now was Cees van Leeuwen. Early '68 they became so succesfull that they switched from Havoc to the bigger Decca label. In May '68 they appeared in TV programme "Moef Ga Ga" with the single "Miracle man", "Something" on Decca. In '69 Paul van Melzen left and joined "The Mailer McKenzie Band" and Sieb Warner went to "The Golden Earrings". Rudy Bennett and Leo Bennink kept on going with new members Jan Vennik, who came from "The Jayjays" and Han Cooper (real name Hans Gordinou de Gouberville) who came from "The Bobby Green Selection". Also a new member in '69 was Bobby Green himself (real name Bob van der Vaart) who obviously came from "The Bobby Green Selection". They released a single in 1970 called "Try to make you happy", "We all come together" on the Negram label. After they released an LP called "Sensation" on the Simogram label they split up in 1971. Jan Vennik went to Rob Hoeke's band and later to "Ekseption". Han Cooper, Leo Bennink and Bobby Green went to "Fisher and Friends". Bobby Green went on to make some more solo records. "Wasted words" and "The same old song" have been re-released on Negram in 1972 and 1981.

Email ThisBlogThis!Share to TwitterShare to FacebookShare to Pinterest
Etiquetas: 1967, Spanish nuggets, The Motions 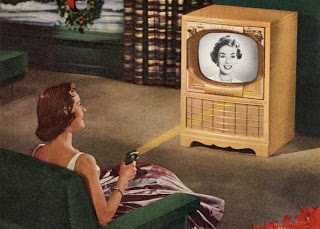 Los No again! Another jewel for this very cold afternoon in Madrid. Enjoy!

Email ThisBlogThis!Share to TwitterShare to FacebookShare to Pinterest
Etiquetas: 1971, Los No, Spanish nuggets 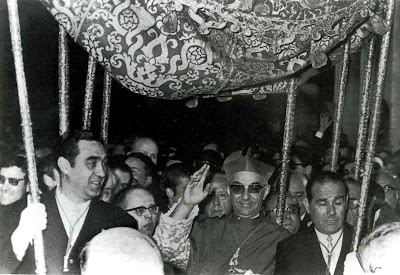 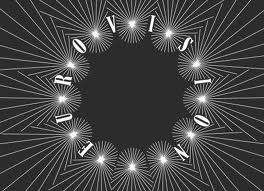 Los 4 de La Torre again! This time with a ye-yé song. The estructure, compasses, lyrics... all you want could serve to take this song as a model of what Spanish ye-yé songs were. Enjoy! 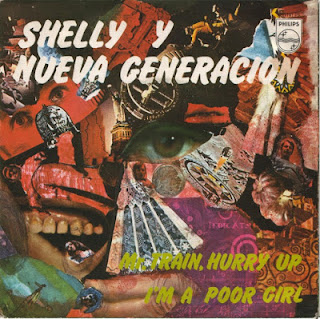 Shelly (María de la Concepción Gutiérrez Lobo) a Venezuelan of Spanish parents, aged 19, based in Madrid, is invited to join the band Nosotros, formerly called The Dribbles that had lost the voice. With the entry of Shelly, also changes the name of the band, giving rise to one of the most interesting legends and ephemeral late 60s Spanish, Shelly y Nueva Generación. Indeed, their career is reduced to three singles in the span of 8 months, from September 1968 to May 1969. But his appearance in the first film of Ivan Zulueta, "un, dos tres, escondite inglés" (1969), her energetic appearances on TV and live, they should not pass unnoticed.


Their first single was released in September 1968, Mr. train, hurry up!, and I'm a poor girl (Single 360 ​​191-PF Phillips, 1968). Then came an appearance on Spanish TV program "Nada se pierde," where they interpret the B side of his first single. The second SP come in December of that year with La Mujer diablo (Devil woman), and I'm just a fool (Single 360 ​​228-PF Phillips, 1968). Precisely, I'm just a fool would be the song included in the above cited, along with other tracks from other Spanish bands of the moment. Their third and final single, released in May 1969, would, as side A, its most memorable song Vestido azul (Nonato Buzar comp.), a bossa nova vesion of Vesti azul, popularized by Wilson Simonal, as ¡No puedo olvidarte, chico! (Single Philips 360.251-PF, 1969) in the B-side, song that closed their short career. Both tracks are sung in the TV program "Telerritmo".


Then the band is restructured again: the bassist leave theband, responsibilities change, accept a Spanishto tour and then another that will take them to Mexico and the United States, that open fissures in the band. To this was added the pressure of Phillips who wanted to take Shelly melodic solo music. A set of circumstances that got rid of the band and give birth to the myth. 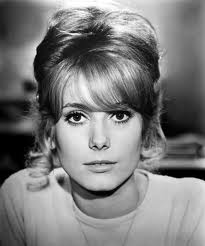 One of my favourite love songs ever! and from one of my favourite bands: The Dave Clark's Five. Their single "Glad All Over" knocked the Beatles' "I Want to Hold Your Hand" off the top of the UK singles charts in January 1964. This song perfectly caughts the sad feeling a man has when his love is wrong. Close your eyes and listen this real jewel!

A NEW KIND OF LOVE
No comments:

Email ThisBlogThis!Share to TwitterShare to FacebookShare to Pinterest
Etiquetas: Exceptions 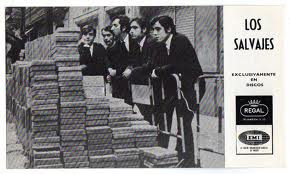 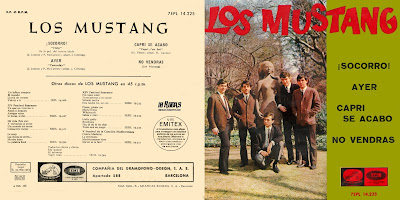 LOS MUSTANG - NO VENDRÁS
No comments: 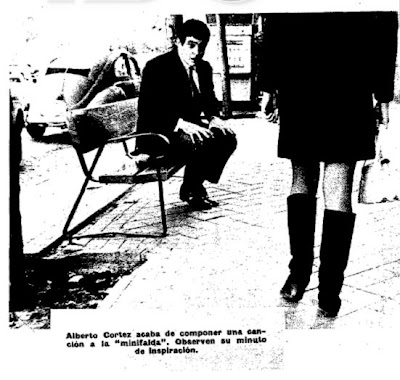 The Italian singer reached a high success in Spain. Enjoy! 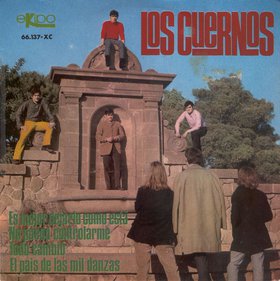 A cover of  "I Can't Control Myself", by The Troggs. Enjoy!