JOE AND THE JAGUARS - KANSAS CITY 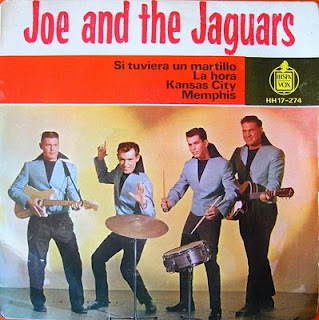 Joe & The Jaguars were four young americans who were doing their military service at Torrejón de Ardoz (Madrid). Leaded by Joe Bennett, experted musician that came fro another US rockabilly band: The Sparkletones. The Sparkletones was banded in 1955 by four men of Spartanburg (South California), bein between 12 and 16 old. They rocroded their first 45 ("Blacks Slacks"), a hit later covered several times (e.g. Robert Gordon). They disanded in 1959. In early 1963, Joe Bennett did go to Spain and, alogn with toher three friends banded Joe & The Jaguars. thanks to their nights by Madrid City, and also to the visit they received of Dion Dimucci (Dion & The Belmonts) did to the Spanish TV for promoting his music under Hispavox Records, this company accepted to be their sponsors: eight songs in two EPs. Let us listen "Kansas City", the Wilburt Harrison's 1959 hit, sung in Spanish. Enjoy!