JUNIOR - NO ME DEJES 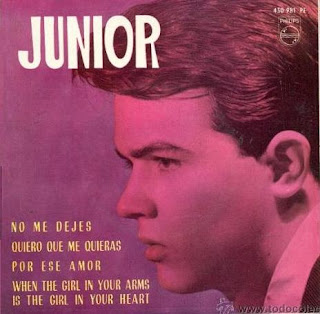 Junior again. "No me dejes" (Don't leave me in English) is a cover of Bad to  me. I have to give some explanations here, since this sog is currently given to Billy J. Kramer & The Dakotas. According with Wikipedia "Bad to Me" is a song Lennon wrote (credited to Lennon-McCartney) for while on holiday in Spain. Billy J. Kramer & The Dakotas released their recording of the song in 1963 and it became their first #1 UK hit.  McCartney  was present during the recording session at Abbey Road Studios. The single would be released in the  USA the following year, and become a top-ten hit there, reaching number 9. It became the first Lennon–McCartney composition to reach the US Top 40 for an artist other than  The Beatles. This is one of many songs the Beatles never put on a main album and wrote and gave to other musicians to play. Written by The Beatles because as they were friends with other musicians under Epstein's management and gave songs as little gift to friends and as a favor to Epstein to help his other acts.
By the way, I upload two versions by The Beatles. One of them is a demo tape record, very, very rare. Enjoy!

JUNIOR - NO ME DEJES

THE BEATLES - BAD TO ME (Demo)