Sunday 28 April 1963
On this day Paul McCartney, George Harrison and Ringo Starr went on holiday to Santa Cruz, Tenerife, for a 12-day holiday. At the same time John Lennon accepted an offer from Brian Epstein(1935-1967)to accompany him to Barcelona, for a trip also lasting 12 days.It was just three weeks after Lennon's wife Cynthia had given birth to their son Julian. 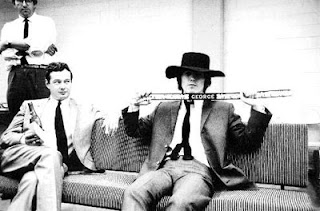 I was on holiday with Brian Epstein in Spain, where the rumours went around that he and I were having a love affair. Well, it was almost a love affair, but not quite. It was never consummated. But it was a pretty intense relationship. It was my first experience with a homosexual that I was conscious was homosexual. He had admitted it to me. We had this holiday together because Cyn was pregnant, and I went to Spain and there were lots of funny stories. We used to sit in a cafe in Torremolinos looking at all the boys and I'd say, 'Do you like that one, do you like this one?' I was rather enjoying the experience, thinking like a writer all the time: I am experiencing this, you know. And while he was out on the tiles one night, or lying asleep with a hangover one afternoon, I remember playing him the song Bad To Me. That was a commissioned song, done for Billy J Kramer, who was another of Brian's singers. (John Lennon All We Are Saying, David Sheff). 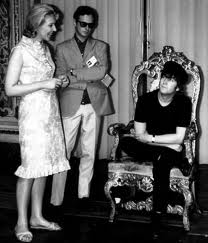 The question of whether any sexual contact happened between Lennon and Epstein has been the subject of considerable speculation in the years since. Cyn was having a baby and the holiday was planned, but I wasn't going to break the holiday for a baby and that's what a bastard I was. And I just went on holiday. I watched Brian picking up the boys. I like playing a bit faggy, all that. It was enjoyable, but there were big rumours in Liverpool, it was terrible. Very embarrassing. (John Lennon, Lennon Remembers, Jann S Wenner). Paul McCartney later suggested that Lennon agreed to the holiday in order to assert his authority within The Beatles: Brian Epstein was going on holiday to Spain at the same time and he invited John along. John was a smart cookie. Brian was gay, and John saw his opportunity to impress upon Mr Epstein who was the boss of the group. I think that's why he went on holiday with Brian. And good luck to him, too - he was that kind of guy; he wanted Brian to know whom he should listen to. That was the relationship. John was very much the leader in that way, although it was never actually said. Paul McCartney,Anthology.


The Beatles knew all along that Brian was gay, although he was professional and a distinguished business man his double life wasn't always as private as he wanted it to be. There were relentless rumours that Epstein was in love with John Lennon. Although well aware of John's talent, his wittiness and good looks were intensely attractive to Brian, so much so that he wouldn't look John in the eye when speaking with him for fear he would reveal his secret. John was completely aware of Brian's feelings toward him and was sometimes teased by his mates about "Eppie's" subtle advances, and so the gossip begins...


"The Beatles were number one in Brian's life always," Sir George Martin has said, "as they were mine." However, Brians homosexuality made the devotion he had for the group a little more complex than Sir George's - "He couldnt help wanting them too." When Brian bought his flat, it was said he was planning on seducing John there, but anytime John would show up, he would always have a Beatle mate with him.The most popular rumour, that has found its own place in history, is the story of John and Eppie's affair in Barcelona, April 1963. Apparently John agreed to go with Brian to Barcelona for 10 days. The decision was made after Cynthia had given birth to their son Julian, but Cynthia wasn't aware of Brian's motives at the time. Realizing that John needed a vacation and a break away, she urged him to go and was left at home with their new born son, feeling lonely and left out.

The vacation to Barcelona was an experience for John, they went to clubs, bull fights, shopped, they would frequent sidewalk cafe's and talk about homosexuality. John asked alot of questions, wanting to know what Brian found attractive in men as they passed by, he enjoyed these talks with Brian. John was a writer, always thinking and always experiencing life to the fullest. John admitted that their relationship was almost an affair that was never consumated. Although some say it was likely they did have a physical relationship. The light hearted teasing continued until it went too far, John was under the influence of too much alcohol and proceeded to beat up a disc jockey at Paul McCartney's 21st birthday party. Brian came to the rescue and wrote a check to avoid a law suit. It has been noted that confidantes of both John Lennon and Brian Epstein say these snippets of gossip are Just myths. Perhaps a double fantasy?

Brian continued to promote the Beatles, and when "Love Me Do" and "Please Please Me" were topping the charts in November of 1963 he negotiated a booking on the "Ed Sullivan Show" for the following February. The Beatles career skyrocketed after the historical appearance, and an American tour was scheduled including a sold out concert at Shea Stadium in New York. It was dubbed the first stadium concert in Rock 'n' Roll history. The Beatles were on their way to stardom thanks to their devoted and faithful manager "Eppie."

Finally, the Spanish holiday was later dramatised in the 1991 film The Hours And Times, starring David Angus and Ian Hart as Epstein and Lennon.
Taken from The Beatles' Bible

Email ThisBlogThis!Share to TwitterShare to FacebookShare to Pinterest
Etiquetas: 1963, The Beatles 50th Anniversary