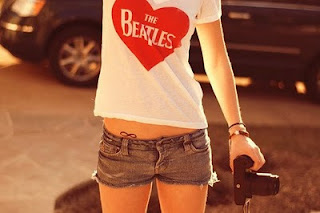 The Beatles only sung in two songs in Spanish. The first time they did, was with the famous song Besame Mucho. There is a polemic about the origins of that song. The Mexican songwriter Consuelo Velázquez (1916-2005) wrote this song in 1940 (see videos below). But the most successfull cover was done by the Chilean singer Lucho Gatica. Nevertheless, according to Velázquez, she was inspired by the piano piece "Quejas, o la Maja y el Ruiseñor" from the 1911 suite Goyescas by Spanish composer Enrique Granados, which he later also included as Aria of the Nightingale in his 1916 opera of the same name. This song is very hard to sing for The Beatles. The other song in which a Spanish word is mentioned is Sun King (Abbey Road) in which words from several languages (including Italian and Spanish) are sung. By the way, the common version of Bésame mucho was the one out of the Decca Sessions. The quality of this recording at Abbey Road (recorded in their first visit there) is much better, however one misses the harmonies of that first version backing Paul that sings lead (and the consequents "cha-cha-pum"). Bésame mucho appeared in the 1970 film "Let it be". I upload that song from the film, and also a rare permofance recorded in Hamburg (Germany), where they reached to play 12 hours each day at the Star Club! Is generaly accepted that was Ted Taylor, the leader of Kingsike & The Dominoes, a rival Liverpool band, who asked permission to Lennon for record the song, done with a tape recorder. Enjoy!