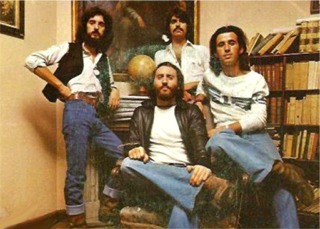 Zapatón was something not well understood. Lead by Tony Luz, just after the disbanding of the famous Los Pekenikes, the great Spanish instrumental band. This amazing guitarist kepts playing in Zapatón with Rafa Fortes (guitar), Enrique Guerrero (bass), and Antonio Martín-Caruana "Ñete" (drums) from 1976. In this year they launched a 45, and in 1977, their LP, also named "Zapatón". Since the leader is a pure rocker, Zapatón took the mid-70s rock and roll revival as the way to follow. With a very clear sound, a hard and rude playing, they perfectly gave thier own touch to classic  R&R instrumental hits. They disbanded in 1978, when Tony Luz created another band, this time a rockabilly band: Bulldog. "Ñete" became the drummer of another famous Spanish band: Nacha Pop. Enjoy!