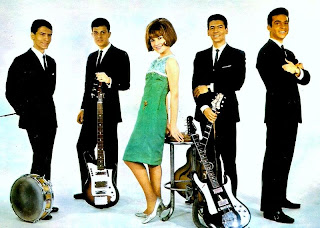 Los Pekes was 60s Spanish vocal pop band. Initially banded by boys of Madrid belonging to the "rondalla" of San Juan Bermans: Benito Gil, José Pedro López Saborit (Pepe), José Ignacio Mateos, and brothers Jesus and Pedro Provencio. In 1963, after the departure of Jose Ignacio, Maria Esther Alvarez joins the band as vocalist. They travel to Gijon to participate in the Festival de la Costa Verde, where they get the best awards that result in the signing of a contract with the label Zafiro. Their first EP is released in 1964, taking a major reception in Spain. Benito Gil leaves the group that year due to family problems, but continues as a music producer. Instead enters Francisco Cervera (Francis). Before the end of the year they recorded the single: "De mi mejoramigo"/"Tú serás mi baby", coming to stand at the top of the record charts and popularity. For those months, Los Pekes obtained an important victory in the Festival de la Canción Hispano-Portuguesa de Aranda de Duero, getting  an agreement with Spanish TVE to participate in fourteen "Escala en Hi-Fi" programs, where they reach a large popularity, but requiring an exclusive dedication to music. Francis decides to disband and continues their studies, and Luis Blanco comes to take his place. During 1965, edit new discs, one of them with an original version of France Gall's hit Poupee de cire, Poupee de son, setting them on the top. They continue his appearances on radio and TV, and manage to enter the world of cinema in the film "Un beso en el puerto" (Dir. Ramón Torrado, 1966). Multiple galas, touring around Spain, and the development of the personal lives of several members, make it very difficult for new recordings, orienting to the live performances with some changes in its members, resulting in the group's final dissolution in 1978.