THE VAMPIRES' STORY
III: FROM LUXEMBOURG TO ZARAGOZA 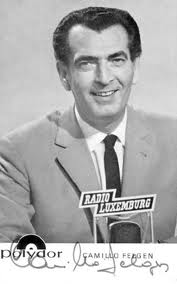 They came from the deepest winter in the northern German to the Luxembourg spring. Since they were free, they went to Verdun to visit the I World War battlefields. The disco at the Hôtel Luxembourg, where The Vampires appeared twice for one hour each evening was chaired by Ferdy, the disc jockey. Ferdy took them to the Letzebuerger (as that is in the local language) day and night life, and brought them many other forms in culture. Another highlight during their stay was a visit to Luxembourg and a tour of Radio Luxembourg. This legendary station is located high above the rooftops of Luxembourg in the castle itself. They met then-known presenter Camillo Felgen personally and smell his live broadcast in Studio Four.
After their stint in Luxembourg they gave concerts in northern France and in Trier, from where the members of a band with a great soul singer were. The Soul was up, but they never could find Det and his band: The Gents. I am talking of The Gents (aus Trier), and of the singer Det Ferring. They were then: Klaus Obermeyer, Det Ferring (facebook), Klaus Horman (†), Peter Binz (†), and Manfred Plenkers (facebook). Later, The Gents changed few members.

In late April, Joe said to Wolfgang that their next job in May was broken, since The Star-Club in Kohl has gone bankrupt. Their tour was finished at these moments. Joe proposed a holiday in Spain. Joe had two years previously played with another group in Zaragoza on the American air base and was pleased with Spain. His saying: "links the mountains, the ocean right. Since they had more than a thousand dollars per man, they took the equipment, and their VW van. For sleeping: an olds army tent for Harold and Mickey, and the van for Joe and Wolfgang.
The first day drove Micky (the only one with car drive license) via highway to Nimes, where they rested. The goal of their next stop was the Spanish border: Port Bou, near the coast. They cross the border the next morning driving along the Costa Brava to Barcelona. In Bercelona, they parked the van close to the beach to take a relaxing break. In the evening they reached Sitges, sat close to the water, drank wine and threw rocks into the sea, on the crests of waves reflected the light of the full moon. The next morning - it was Sunday – they finally reached Zaragoza. In the evening they finally reached their destination and neighborhood based on the campsite Helios.
That same evening, this explored this great city where thousands of people were out, visited several tascas (specialty pubs). After a week in Zaragoza, and without have played in the Air Base, they decided to practise with their instruments, in the open, side by side with the van. They began to play, and soon after hundreds of people were sitting on the wall that surrounded the facility to listen to our music. Enthusiastically, The Vampires received  thunderous applause. The people gave them wine, food, cigarettes, and some even gave them money for these shows. Then they asked a young man who spoke English very well, if they could give a concert in the Auditorium of the University the next Sunday. He would arrange everything. They were thrilled and were dressed in our fur pants, matching shirts and Beatle boots, which they had bought in Hamburg. The hall was packed to the rafters and the primarily female audience screamed during the entire. They threw handfuls of autograph cards in the set, which beat so fast. Thus, they had what the Beatles have felt at their concerts. Such an enthusiasm we had never experienced before!
Words failed them.
In Spain was their future, here they had to settle down. This was aware of at that moment. These exploiters in German pubs where you had to work as a human jukebox could, in the future, remain stolen. After such success, unfortunately for them, Zaragoza offered no further opportunity to perform, they packed and went for Benidorm, because this place was a term tourist center.

Email ThisBlogThis!Share to TwitterShare to FacebookShare to Pinterest
Etiquetas: 1967, The Vampires