THE VAMPIRES (VI)- HOLD ON reloaded

In early March, Joe and Paul flew for a few days at home. On 13 March visited Mickey and Wolfgang visited Cinema in Castelldefels. When they left the theater after midnight, where there were a couple of young guys who were asking which of them was Det Ferring. They were from the criminal police in Barcelona, ​​though there were a few inconsistencies, and to clarify this, would come Det. Micky and Wolfgang followed the police car, then back to Det take home with them. They took him to an office in the notorious police station in Via Layetana. The point was something about the seduction of a minor! Talking with a recognized layer, Wolfgang could know that Det and Mickey were moved temporarily to the prison in Barcelona. The whole thing was "muy dificil" very difficult because they are suspected of kidnapping and child predation. Then there were many years in prison. Teresa and her friend had run away from home, but they could do not know, and their totally distraught parents had turned in desperation to the police. The rest was a matter of research by the well-organized, powerful police apparatus. At that time women were in Spain until age 23, men since 21st. The two were 21 and 22 years old., so the law still a minor and the Spanish judiciary was relentless on this point. Nevertheless, Mickey and Det came into freedom eight days later.

From 14 May they were back for a few days in the recording studio in Madrid, because they had worked four soul tracks. There were two original compositions: Your time has gone and I can go down. Furthermore, two of them arranged Dock of the Bay by Otis Redding and the traditional piece A Shot of Rhythm and Blues, a traditional piece. And they had committed the brass section of the band Los Canarios and the British organist of The Mode band: Graham Bircumshaw. The Mode had as manager to Tony Secunda (24 August 1940 - 12 February 1995), who was also of Procol Harum.

The arrangements for the wind Paul had written. 15th during the summer months, up to and including September 1968, they played with breaks again in Calella, where they acted in the past year so successful. From 14 to 30 August they made guest appearances in Madrid, Toledo, and in Bilbao. On their drive towards Euskadi, the Basque Country. According to their guest performances they back to Calella to bring their contract to end. This was followed by galas in all parts of the country. End of the year:  Joe left the group and went along with his Rosie to Germany, back in their hometown of Trier.
The gap that he created was of the French guitarist Dominique LeBeau, whose cradle was in Tahiti, closed more bad than good. Dominique had a soft spot for Jimi Hendrix, and was thus not necessarily on their wavelength. But what could they do? Suddenly, Mickey and Wolfgang were the only ones that dated back to the early days. Earlier 1969 this year two men were standing in front of their door to tell them that they were in breach of Spanish customs regulations: they drove by with a non-imported and unregistered vehicle on Spanish roads. Mickey had to hand over the car keys and sign a waiver. Then they seized their loyal Volkswagen bus. They went inevitably to a junkyard, where they acquired a used Citroën van, called by Wofgang “huevo”. In March 1969, Mickey and Wolfgang back to Germany to visit their parents few days. 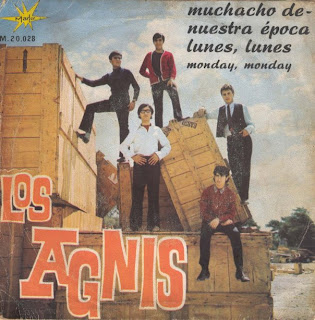 In early summer, they had a gig near Barcelona, ​​a Spanish band as the opening act. The band was called "Los Agnis". The guitarist of the band could have been visually the twin brother of Joe. Only his hair was jet black even longer. He impressed and fascinated them with his incredible playing technique. During the break they started talking, because they could vividly imagine integrating it into their ranks, as finally happened. The next day appeared Antonio Ponce Fernández, Tony briefly (facebook), and expressed his willingness to join with them immediately. From then on they were rehearsing almost every day in a friend's house, and during this session they created a number of original compositions. (“Domino”, Dominique left the group at the same time and moved to Zaragoza). Now Tony knew all people in Barcelona, which was a great advantage for them, because they fervently hoped for a new recording contract, since the agreement with Sesión Records in Madrid had gone and they had never heard from them again. During one of their first gigs with Tony, the manager of a Barcelona new record label (Ekipo) talked with them. His name is Artur Mas and he had the idea for his company with a new label called Dimension, to call progressive music to life. They were exactly according to his ideas. However, a name change would be inevitable, because he had to give the group a completely new image. The Vampires would have fizzled in his opinion. He was right.

In October, they completed an agreement with Artur Mas, and called them Evolution, also an idea of ​​Ekipo. Evolution became oe of the most recognized progressive rock band in Spain. But this is another story well documented in the www.

Email ThisBlogThis!Share to TwitterShare to FacebookShare to Pinterest
Etiquetas: 1966, Evolution, The Vampires