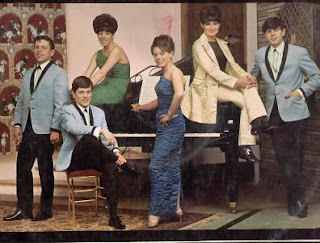 The Zara's again!. By the way, Marino Zaratiegui, a member of the band, kindly sent me an email with The Zara's story, that made me pulish up the story I told in the first post devoted to them. Here goes an abstract of that email:

My father taught music theory, guitar, accordion and piano at first himself and then with teachers from Tafalla, Zaragoza and San Sebastian when we were very young. He wantedthat we studied  in the Paris Conservatoire and in 1952 took us there. After few years led us to Milan where he was told they had the best schools of accordion, harmony and composition. Later, our own musical inclination led us to leave the classics and started playing rock and roll, we were three brothers and two sisters, changed the electric guitars for a classic, the accordion for an organ, a sister learned to electric bass, a brother drums and saxophone and I by 1960 most of our repertoire was rock and roll and country western U.S. At that time we were already a professional group and where we were offered better contracts in Germany performing in the clubs of American military bases. This environment helped us a lot in our musical journey. We continue to develop our career combining musical talent and the presentation of our activities for 1968 were a very visual productions, with instruments and equipment "top of the line". In 1969 was offered a contract in the United States, was for three months but continued offers and travel all over the East Coast until 1970 came in a five years in Las Vegas. there down roots, till a brother and sister  in 1977 broke the original band in 1977. Just Toto was the best singer and lead guitarist, forming their groups continued to act according to their musical progress. In 1990 began his presentation at the Mirage Hotel in Las Vegas and continued there for over ten years. Meanwhile, he open a recording studio and developing new talent as ingeniro sound and record producer. He keeps in Las Vegas recording and performing as a soloist. It seems as if time had stopped, singing better than ever and I play keyboards and guitar that I die of envy.
ENJOY!!

Email ThisBlogThis!Share to TwitterShare to FacebookShare to Pinterest
Etiquetas: 1965, The Zara's