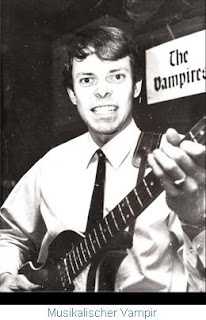 THE VAMPIRES' STORY
II: FROM SCHWEINFURT TO LUXEMBOURG.

After several unsuccessful works elsewhere, Wolfgang renounces to the last one. It was mid-September 1963. On the same afternoon he submitted his resignation as TV repairer, he went to Tivoli, where this month played a Swedish group and saw with amazement the empty podium. "What's happened here?" he asked the manager, who came at the same moment from the kitchen. "The boys have turned on the boss on the worst one, and since we have just kicked! But tell me, do you play it with the Vampires. Would you play to end the month and you would have like to be professionals?, then we would help you. Our connections extend over the whole of Germany." (At that time, the German gastronomy, especially the nightlife, were firmly in Jewish hands). That was the opportunity for which they had been waiting for so long, and the rest of the band had not at all superior.
So they stood on the same evening as a professional musician at the Tivoli and felt great. Then came one evening a smartly dressed man to the podium and asked if he could join us in singing a few twist tracks. The twist was inexorably losing its stage on the top. They a little sceptical, since they had never practised unrehearsed. He just said: "When I raise my hand, you're playing a semitone higher, and when I show down, you go back!" It was the known records star Billy Sanders, known for the hit Hello Mr. Twist (1961. Ariola 45.260). (See in youtube). Billy had wandered by chance to Schweinfurt. The interaction worked so perfectly, as if they had never done anything else.  In November 1963 they started as professional musicians at Bamberg. The long-awaited moment had come: The Vampires gone to an “wide world” unknown musical adventure.

Bamberg:
The Atlantic was a typical Amikneipe (Pub) at the first floor of an old apartment building, in the Franz Ludwig Street in Bamberg.  It was a long room, in the middle was on the left side of the podium places. Opposite we went into the kitchen and at the front there was the bar, behind the shrewd young women chanted the Americans busily their dollars out of the pockets. See VeteransBenefits Network > Social Chat> Anyone Stationed in Bamberg, Germanyin the 60's?. The Americam Army in Bamberg was at the Warner Barracks. The proprietor was Rudolf “Rudy” Ochs, who also was the owner of several apartments  in Bamberg (E.g.: 7 Poodledorfer Strasse). Under the Atlantic Ocean, on the ground floor, there was the Tivoli, a high-level local, or Nepplokal, where always were playing excellent musicians. They had many opportunities to listen these musicians in their breaks. 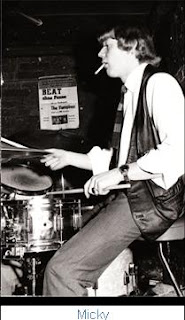 Fights between American soldiers were commonplace. Almost every night, after 22.00, when they go to the break, again entered the podium, it popped. Then, the U.S. military police came immediately alerted by Rudi, on the scene and made again for peace and order. On 22 November occurred the next disaster. They had just returned after 22 clock started playing when Rudi said: "Wolfgang light on, music off. President Kennedy has just been shot!". Rudi entered the stage, grabbed my microphone and held only in English and then in German a poignant speech to the guests. Some made embarrassed faces, some began to cry, and others shouted hurray again, and the next moment the wildest brawl was in progress. Since a chair flew across almost the whole restaurant. The probably had to have been thrown with tremendous force, as the room was not too high. When after a while the situation had relaxed. They were really so good that Rudy committed them for another month. So they we played in December in the Atlantic Bar.
An evening in late December, a song from the jukebox, made Wolfgang sit down: “From me to you”, from an unknown group called The Beatles! That sounded very different than what had come to their attention until then. The guitar did not sound shrill metallic, such as in the Shadows or, specifically, the Spotnicks, whose sound they ever tried in vain to imitate, but soft and full. Since harmonica was involved. The polyphonic singing in some passages highly creepy. The harmonic progression completely unconventional, not after the 12-bars blues scheme, as usual, most of their titles. It just sounded different, it was revolutionary. They tried to replay this song, but failed to have the polyphonic singing, because with the choir they were overwhelmed. The only singer in the band and Wolfgang were Charley, and Charley had often problems with the correct intonation. Shortly afterwards: “I Wanna Hold Your Hand” and “She loves you”. They were under pressure, because audience demanded the same from them.

Fortunately, Beatlemania was not yet reached in the Upper Palatinate. Fifteen days after they were playing at Café National since January 1, 1964, the January 15 shortly after 22 clock, suddenly came back a man in uniform - a postman - to the stage and asked: "Who among you is Wolfgang Junger?" "A write-in Express letter, please sign here! It was his call-up: April-2, 1964, near Nuremberg, 1st Air Force Training Regiment 2nd, Company ...
Since the accommodation in the hotel in Bamburg was very hard and poor, they decided totake way up North. They spent February and March in the far north, in Schleswig. It was also the first time that they have, since they were professionals, working for a German restaurateur. They got the boss, Mr. Callsen, we got on brilliantly from the start. We were obviously just as likeable as he them. The songs from the music boxes and their interpreters were almost totally unknown to them: The Searchers, Tony Sheridan and the Beat Brothers, The Swinging Blue Jeans, The Liver-Birds, The Rattles, The Phantom Brothers and of course, The Beatles.

It had even got round to Schweinfurt that in the city of Hamburg should be a famous temple of music. They awaited to their first day off, the Monday, to satisfy their first cause: to inspect the famous Star Club (Grosse Freiheit 39), opened two years earlier with its the famous slogan: "The need has an end”. Above the name on the large illuminated panel above they could read some guest appearances: Bill Haley, Tommy Roe, Joey Dee, Fats Domino, Chubby Checker, Jerry Lee Lewis, Vince Taylor, Ray Charles, The Beatles, Brenda Lee, The Everly Brothers, Johnny and the Hurricanes... the list was endless. Soon later, Wolfgang Junger did go to a military centre and airport in Ergind Air Station (Bavaria). Just after back to Schweinfurt at late 1964, Wolfgang tried to contact with the rest of the Vampires’ members, so he visited Mickey's mother in Bergrheinfeld who then told him that they played this month in Nuremberg in the Scotch-casino. She showed him some pictures and he saw with amazement that none other than Mickey from the old master-band was more here. On an autograph of them shone right above the Star-Club Records logo! They looked nice and had hairstyles, like the Rolling Stones on their first LP.
Wolfgang went to Nuremberg and I entered the Scotch Casino Bar. Micky recognised him immediately and rushed over to me and introduced me to the rest of the band. Harald, the second guitarist was immediately appealing to Wolfgang. Joe, the lead guitarist, was an ace on his instrument. Ede, the bass player said he would get out in December anyway, the others did know nothing about it and if they would be right, Wolfgang could take his place. Wolfgang just hoped that Joe and Harry would be in agreement. In Micky, he was sure about that.
Wolfgang spent the nexttwomotnhs as a car radio mechanic in the Bosch Service on Marienbach in Schweinfurt, because he needed money for a completely new system that the boys were looking forward continue to make music with me. In late November, Wolfgang drove to Crailsheim, where The Vampires stayed in the meantime. Together with Joe, he immediately went on to Stuttgart from Barth music store where they bought a Selmer bass amp system, a Höfner Beatles Bass' and a Shure microphone.
From 1 December 1965 they stood together in Bonner Taboo, which belonged to Blatzheim Hotels During this time, was a Berlin band called The Lords storming the German charts with “Poor Boy”. But The Lords obviously had no idea what they were singing there. Their English was horrible.  - and on vinyl! I am also disturbed their visages arrogant that they set up photos on display. On Thursdays there was a talent competition with a view of a recording contract. A kind of DSDS (Deutschland sucht den Superstar), or American Idol (in USA) in miniature. The audience evaluated the candidates and a jury (consisted of a disc jockey, and an employee of the record company), who made it to the next round. Someone had brought all their relatives and friends to vote. For The Vampires this was an horrible experience. The January 1 1965, the next day, they had to play in the Scoth Casino for all the month long, a place full of smoke. They played there from 20.00 to 04.00. Sundays and public holidays - and there were many in January - 15 to 19, with 15-minutes breaks after 45 minutes playing: four human jukeboxes. Then an hour break and again 20 to 4 clock. Always 45 minutes at a time then we took a break of 15 minutes. From 20.00 came the girls working during the day at Grundig in production, who stayed until about 22 clock, since most of them were not yet eighteen. After 23.00 appeared the girls working at night on the Frauentormauer to enjoy their well-earned breaks or after work. Ending January was coming the day of the final bill. One of the two Jewish owners took before the payout. The man was a walking safe. For all his jackets and pants he pulled out thick wads of money with hundreds of which he flipped through it several before them on the table. Of the bags had been lined with tens of thousands of D Marcs. In the showcase near the entrance they could see for themselves that would occur with a Spanish band called Los Bravos. The Vampires sincerely said to their coleagues: sorry!

Ansbach, the capital of the district of Middle Franconia - again a typical garrison town - with about 29,000 inhabitants and 10,000 U.S. soldiers, was the next stage of their musical odyssey. Ms. Schernack, a lovable old lady, our landlady, was very concerned for the welfare, their boys', "Be me just be careful at night. Ansbach is a dangerous place! "How right they are so, we should very soon lesson the hard way. They played atThe Florida Bar - again a typical Amikneipe - whose owner, Mr. Perekalski also had the Star of David on its national flag. There were four live music clubs in Ansbach then: Schwarze Bär; Cafe Schmidt (renamed today as Old Ansbach), Florida Bar, and Regina Club (today at Rezatparkplatz). The main trouble was the relations with Americans in the free time. On the very first free Monday they went to Hamburg, that was only a stone's throw away, and it could hardly be expected to enter again the Star Club. What on earth is happening here in the meantime? The stage seemed much smaller and behind was a shirred curtain the whole gave the charm of a rural beat shed. Bands played only on weekends. This seemed to them the beginning of the end, and actually the star of the Star Club was unstoppable on the wane. On 12/31/69 finally closed its doors with a concert by Hardin & York. This fact made them think what they should do differently. Joe started from then to put their own ideas and improvise at will. And Harald sang his songs in the way he always did: in Blues. The end of March, it was snowing like crazy and they thought with horror of the journey ahead, as from 1 April they should guesting for 2 weeks in Luxembourg.