Since the savings were nearly exhausted, Joe rationed meantime even the food and cigarettes to reduce spending to a minimum. They hope to have anagreement in Benidorm. But even that proved to be a flop, because they had committed their bands during the last winter. Joe showed them a calendar of events in which they discovered the photo of Indonesian band that they knew well from Germany: The Black Dynamite. 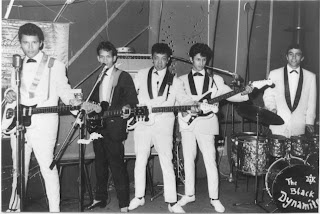 Here in Spain they called themselves Los Indonesios. They played in Madrid: in Florida Park So, they gone to Madrid, since they believed that Los Indonesios could, and would help them.

Completely unnerved Micky turn on the six-lane Gran Via St. from the right to the left lane. Eventually we stood still in front of the portal of the Florida Park, in the center of the city park Retiro. A man appeared and they tried to get into conversation with him. He asked, "Do you speak English, parlez vous Française, you speak German, Dutch praat U?" "We are German," they replied. "Well then, we speak German. My name is Doğan, I am a Turk and the owner of the Florida park, what can I do for you? " (Kurt Dogan was a Hungarian violinist how moved to Spain about 1949, getting great succes during few decades) 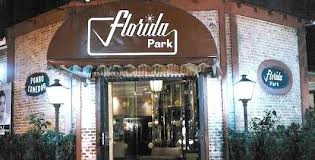 "We are a German beat band and seek opportunities to perform in Spain," Wolfgang said. "Let's see, maybe I have something for you: Tomorrow will take a celebrity wedding and I have no music. Would you be willing to play for the young guests? "
"Yes, yes, I like the Spaniards. You are exactly right. See you tomorrow! "
The guests sat quite Coliseum moderately in a semicircle around the stage, which ranks in ascending order. The countless youths were from totally excited and freaked out literally! During the break, a man in his fifties came to the podium and introduced himself in German with the words: "Excuse me, my name is Fernando García Morcillo, I have served under Adolf Hitler in The Blue Division. We have a recording studio in the street Vallehermoso Numero 14 - I am the owner. You could come next Thursday at 12 clock for test shots? ".
Belatedly they finally arrived. The recording room was a room with soundproof walls and ceiling. And lots of Neumann microphones were available (the best studio mics worldwide). Later, they all went to lunch at a restaurant across from where they spent the next three hours with starter, main course and dessert, with red wine. Then, they smoked cigars, drink Brandy, and then had enjoyed the coffee with anisette. Then, they went back into the studio. "Now you play something”. It was the first time they could listen to their music, and it does not even sound bad. "They have to play their own songs, so we can make on the plate," said Señor Tenorio, the enterprising producer.

"Let's write texts, Wolfgang. You speak the best English of all of us", encouraged the others to Wolfgang. In the meantime they were at the campsite Osuna, who was just outside of Madrid. Finally, Wolfgang wrote something like this: 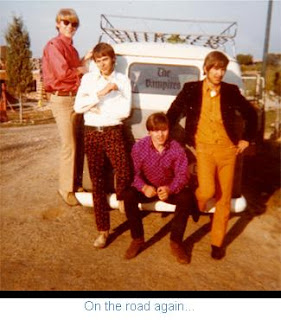 Later, he wrote three other texts: Hold On, Change Your Mind and New Love. Then Joe come up with the melody. They practised the rhythm, the song inserted at specific points to choir and finished was they first original song that they immortalized immediately. The result was an EP, a 45 plate with four titles. Then they had to audition for the representatives of the great clubs of Madrid, and signed the lucrative contracts they offered them.

Their first gig was at Club Caravelle Barceló St, 11), a Youth Dance Hall, very similar to the German Star-Club. From then on, things really took off with them. They rented a luxury apartment with a maid, just behind the Bernabeu football stadium: Paseo de 82. From the opposite, the restaurant Casa Pepe, where they could deliver. Many beautiful senoritas visited them constantly, and mountains of fan mail rainning over them. In Casa Pepe they saw on television the final of the World Cup, in which Germany lost against England (Juny 30, 1966). 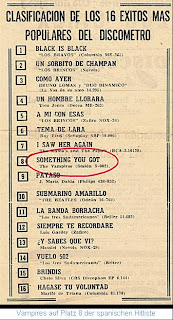 They picked up quite a few EPs were passed for the purpose of advertising by all radio stations in Madrid, and enjoy their lives to the fullest as stars, with fans on the streets ran after them. Once they were even with “Something You Got” before the song Yellow Submarine by the Beatles in eighth place in the charts. One afternoon seemed Señor Morcillo, the full-time director of a Madrid Crime Commissioner was, in their apartment and made them a proposal to include the scooter company Vespa a musical speech in chis recording studio: CIMA SA., in which we recorded our songs, was his second leg. Morcillo was also the composer of a love song, which was known in the Spanish-speaking world each. Maria Dolores was the title, and he had this song for his wife, Maria-Dolores,) written.It would be a good thing, because they would then be heard constantly on the radio. Unfortunately, they should adhere precisely to the specified text and the melody:

On 1 October 1969, during a military parade, thye could see to Generalísimo Franco for the first time, in the Gran Vía way to Plaza de España. At the Club Monaco played a Spanish beat band named Los Pekes. Their beautiful singer María Esther Álvarez was seen exclusively in the company of her feisty mother who stayed scrupulously sure that none of the Señoritos her daughter came too close to her daughter. The mother was standing each time as a guard dog in front of her dressing room door when she was changing. This band Los Pekes asked one day desperate to Wolfgang if he could help them. Their bassist was ill and would turn out for a while. Wolfgang was delighted about their confidence, and so he stood there for the next two weeks.

One night, just coming out of a cinema, their manager was standing in front of. He made it clear to them that they had to immediately bring our instruments to the airport because they were playing from the next day for two months in Casablanca. Rora the club in the Rue d'Antibes, in which we should guesting October and November, was in Ain Diab, a suburb of Casablanca. They were housed we were at the hotel Notre Alsace, 59 Boulevard de , the beach promenade of Ain Diab. I mention it because this name sounded so strange and exotic. On one of our walks on the beach we had the idea for the song: Walking in the sand shots, we were rehearsing on site and on our return to Madrid immediately. The album cover was decorated with a hand-colored photo of us, walking in the sand '.
Theye reached again in early December the Iberian Peninsula. Because they owed their landlady Doña Manuela de Leccea, a member of the Spanish nobility, the last two months' rent, we drove immediately after arriving by taxi to her villa to pick up our keys. So that he also could be sure to get her money, they showed her the wad of money they had. Since they wanted to spend Christmas with their parents in Germany, they flew on 22.12. to Frankfurt. Micky and Wolfgangt sat on the train to Schweinfurt. Joe and Harold's parents lived in Hanau. It had much closer. As agreed, they met at 27.12., 24.00 for the celebration of Mickey's Birthday, at the main train station in order to beat a trip together to Spain. There they met again with Det Ferring, the Trier singer. They shook hands, told him of their existence as disk stars, gave him some of their records and asked him if he had no desire to join them. He said he would have to think twice about that and would call them. On 6 January 1967 they met Det at the Atocha train station.