THE VAMPIRES (5) - SOMETHING YOU GOT reloaded 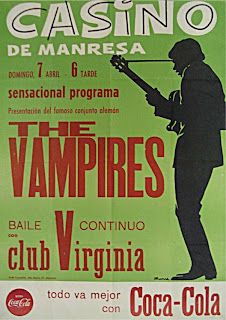 On January 12, 1967, they played in the studio: Sunny, Get Off My Life Woman and Gimme Some Lovin, the latter of the Spencer Davis Group. This movie was unfortunately never published. On 13 married their producer Señor Tenorio. The pompous celebration took place at the Hilton Hotel. The Vampires played there. On the morning they flew to Barcelona in the TVE studios in Hospitalet for the TV recording of Walking in the sand. On 15 they went back to Madrid, where we performed in the evening at the club Nicca’s. On 17 they played a gala at Club Victoria (Francisco Silvela 48, bajos del cine Victoria).

On 20 January, they gave an interview to Radio Peninsular, which was broadcast live. On 22 they were in their apartment by the music magazine journalists interviewed TELVA. On 30 they were at 18.00 on Radio España, then back at the club's Nicca. On 31, 1.00 am in the morning they gave an interview in the studios of Radio Madrid. In the meantime, the record company prepared them for a music festival, the Second Certamen Internacional de Conjuntos Musico-Vocales, from 1 until the 4th February in León took place in León. Each of the participating groups had to play three tracks: A piece of your choice, then the mandatory title Déjala Dormir, and a leonesisches folklore piece that each group had to arrange themselves. The third piece of a previously unpublished original composition. The cover of their choice was Walking in the sand.
Déjala Dormir was arranged in the style of Michelle or Nowhere Man by the Beatles, with a lot of choir La-la-la. Their own song: Vamos a Cantar (Let's sing), with Spanish text, and never immortalized on board. On Tuesday, January 31, they went to Leon, capital of the province of León in northeastern Spain, where arrived the next morning at 6 o’clock, and rested in Hotel Riosol (Avenida de Palencia  3), in which all participants were accommodated.
In the evening they stood to classify for the finals on the main stage of the theater, where the festival took place. They reached the 3rd place, and won 25.000 pesetas (150 € today). From 6 to 12 they appeared again in Nicca's Club. In November appeared a song destined to be a worldwide hit: Black is Black by Spanish group Los Bravos, immediately used by them to expand their repertoire. Their singer, a Berliner named Michael Kogel aka Mike Kennedy, entered the club's Nicca and sat right in front of their panel. Det who knew Mike from Germany volatile encouraged him to come on stage and be with them to sing Black is Black to sing, which was now in all the charts of the world in the first place. Mike said yes, and Black is Black was sang in Nicca’s Club. From then on, Mike spent his free time with The Vampires. From then on, they became friends, more than compatriots, with much annoyance of his manager Alain Milhaud and the rest of the band.
Mike even came back and back to their gigs to sing together with Det Black is Black. This increased their success and reputation enormous. On 19 we played a gala for the magazine TELVA. On Sunday, the 26th, they played their songs success of the festival: Walking in the sand and Déjala Dormir in the concert hall of the station Gran Musical. The songs are from our record label, to an audience, a live recording. This was done primarily for the archive of this station. On the plate was then later the screaming of the guests heard. From March 1, 1967 they played back in the club Consulado, along with Dave Dacosta and the Spanish band Los Canarios. On 9 they were again on TV in the show Hi-Fi on the stage. On the 12th, a Sunday, at 14:30 clock, they gave back the Gran Musical honor. On 13 they were again in the recording studio to record new tracks. From 20 to 27 they did not play, but skiing in Navacerrada, the nearby mountains called Sierra de Guadarrama. On March 30 Wolfgag celebrated his 23rd Birthday. Then they had gigs in clubs Kursal, Versalles, and Victoria.

On 6 April, a Thursday, they had another recording session in the recording studio. Harald had fallen in love with a young Turkish film actress, who has been riding in the Western Pancho Villa, and participated in the strip along with Yul Brynner and Robert Mitchum. The film was made for Paramount Pictures in Almeria. He had moved in with her and said that after he went with it very well, to have to hide from our music business. From then on, they played our concerts without him. Eventually, he took his leave of them. Finally Harald moved to Turkey with Seyyal Taner, the name of his girlfriend (she is still a celebrated singer and actress), backing after to Germany. In 1968, she married in Hanau, on 9 November 1969 saw her daughter Melanie the light of day.

After the failure of her marriage Seyyal returned to Turkey after Istanbul, starring in numerous films. It applies since the 80s as the Tina Turner of Turkish pop music and appeared in 1987 as the representative of Turkey to the Euro Vision Song Contest in Brussels. Unfortunately, their energetic performance as Tina & Türker Lokomotif came with the jurors to not good, because they came in last place with 0 points. This placement she has still not digested and retired in subsequent years of the music industry. Meanwhile, she lives in Bodrum, brings sporadically released albums and playing with some telenovelas. The Vampires’ apartment in Paseo de was in the 4th floor. Meanwhile Det became their frontman. On 6 May the Vampires met The Shadows while the last ones were playing in Ponciano (Madrid), and, during a break, tgey were talking with Bruce Welsh, the rhythm guitarist of the Shadows. During May they keep playing in club-Nicca's, when one evening the manager came to the podium with a bottle of Johnny Walker, four glasses and ice, and asked them if they played songs by the Rolling Stones? When they said no, he said that the whiskey was by a member of the Rolling Stones, who was among the guests. Sat in the back of the club, surrounded by several people, the Stones bassist Bill Wyman was there in person! During the break Wolfgang took his glass, and went to met with Bill Wyman to thank personally for the whiskey. He tells Wolfgang that he and the singer Glyn Johns and the London band The End (wait for my next post on The End in Spain), with whom he is friends, stayed on promotion tour in Madrid, because he wanted make it a success in Spain.

The Vampires rapidly became friends of the members of The End. The Hi was great when they later met again by chance in Barcelona. Gordon Smith, the saxophonist was a very rustic type. His girlfriend was beside himself with fear, because Gordy hosted a live snake in a bucket in his room. Thus escape the snake could not, he had placed a newspaper on the bucket ...

Then they played on radio El Gran Musical, at the U.S. Air Base Torrejon, in the theater of Valencia and even in Zaragoza. From 22 to 27 they then made holidays in Benidorm. On Tuesday, 6th June, we went in the morning to Barcelona, ​​where we are at the 7th should play for the opening of the nightclub Romano di Capri. During the breaks we surrounded the elegant invited guests, clad in tuxedos and evening gowns, clinging to their whiskey or champagne glasses. There they played until 22 June. The concerts followed in Cataluña, and they quickly realized that they had there, the much better opportunities to develop, as in Madrid, which is like a desert island in the central Spanish plateau.

From 6 July to 31 August they made guest appearances in Calella. There we were at the club on a daily basis Bergantin, only interrupted by numerous concerts on the coast or inland. Calella was a typical German tourists stronghold, in other words: folk festival around the clock. They inspected all the pubs and made friends with Jordi, the owner of Kiki's Bar. The liked the casual way, as we put on the day. Who had a white painted Willy's Jeep, he left us and with which we, the narrow streets of Calella made uncertain. 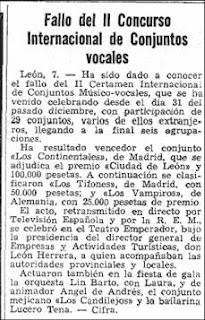 In Calella they also met the Dutch saxophonist Lodi van de Bliek, who from then starred as a time with The Vampires and enriched their sound with his skill. Then they expanded their occupation with the German musician Kurt “Paul” Waldhecker, a brilliant saxophonist and arranger geur. On 24 November they again stood before the television cameras of TVE in Madrid Casa de Campo. Then they said final goodbye to Spain's capital in December 1967. They lived from then on in Castelldefels, down ten kilometers south of Barcelona, in a home that was of the most famous Spanish architect, Antoni Gaudí was, where Wolfgang lived till his departure from Spain in late 1972. They rented two apartments in apartment house near the beach El Alba, where we spent the next few months. During their rambles around the houses they met  in early 1968 two Dutch girls, whose parents owned an apartment building in Castelldefels, which they rented out during the summer, on a Dutch travel agency, to tourists. They made friends with her family very soon. 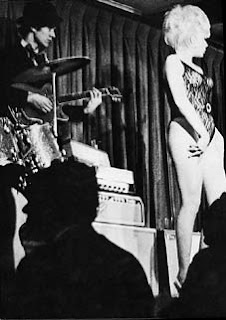 The owner was Ms. Erkelens, and her eldest daughter Susanne, “Suze “, with whom Det has been married since 1971. One day there was a knock on our door at El Alba and outside were two girls: Tere and Elisa, that they knew fleetingly of Madrid. They had left Madrid behind, because they wanted to look for work in Barcelona and would like to, if possible, hatched with them for a while. In their infinite goodness, Micky and Det presented them their beds available. A real living community, since Joe's girlfriend Rosi, who had come from Germany in the spring, also lived with them. She stood a little later in their performances as Go Go Dancer on stage and enriched their performances visually, because she was very pretty. Once, when they made guest appearances on Menorca, the organizers had printed even own posters for them.

The lady in the cover is Nebahat Çehre, not Seyyal Taner